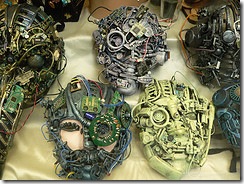 The robotic love-slave- it’s a science fiction trope as old as the hills, but that doesn’t stop it getting dragged out of retirement by the occasional academic … not to mention science and technology websites looking for a humorous Valentines Day item. Ahem. [Image by kaibara87]

Cosmos Magazine talks to David Levy, a professor of gender studies and artificial intelligence, about what he sees as the inevitability of robot lovers:

“[He] is convinced the demand is there and that market forces will provide the financial drive to overcome any technical – or psychological – obstacles. “It is only a matter of time before someone in the adult entertainment industry, which is awash in money, thinks, ‘Gee, I could make a pile of money’,” he says.”

I’m particularly fond of The Holy Machine by Chris Beckett, a science fiction novel that deals with a man falling in love with an android prostitute; it also has a whole lot to say about the conflict between science and religion, and a redemptive ending with zero schmaltz.

Any robot romance reading recommendations from the audience?