There’s nothing quite like a good daily mixture of RSS feeds for generating some great serendipitous synchronicity. Today’s topic-from-the-blue – unique hotels! 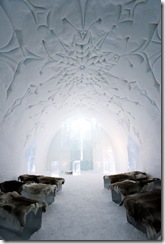 When Geoff Manaugh isn’t cranking out what are arguably the posts most worth reading at io9, he’s churning out great posts about mad architecture-related stuff at his own BLDGBLOG … like this one about a hotel in Sweden made entirely from ice, or this other Swedish “hotel” – which is in fact just a bunch of fishing shacks on a frozen lake where you can stay to watch the Northern Lights. [Image: Photo by Ben Nilsson of Big Ben Productions, lifted from BLDGBLOG] 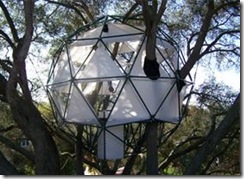 Aiming for slightly warmer climates, Warren Ellis’ grinders point us toward some impressive treehouse designs from around the world, delivered in the web-ubiquitous top-ten list format. The ice palace is pretty, but I think I’d rather be sleeping in one of these if I was to be resident for more than one night. [Image lifted from WebUrbanist]

The ice hotel reminds me of a scene from Julian May’s Galactic Milieu series, and I’m pretty sure there have been tree-cities in a number of books – Dan Simmons’ Hyperion Cantos, for a start, and a Brian Aldiss novel whose title eludes me for now.

One thought on “Bespoke hotels of the future”