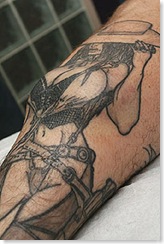 While Paul’s the normal go-to guy for body hacks, I thought I’d share one I came across. In my book it’s not quite as cool as having a touch screen implanted, but some of you may like this more. It’s also a good lesson on how our bodies don’t always appreciate having odd things stuffed into them.

A Canadian tattoo artist had a cowgirl inked on his calf, and last year decided she needed to look a little more 3D, so he got a surgeon friend to implant two small silicon implants into her breasts. Unfortunately, they were rejected and he took it upon himself to perform a bit of self-surgery, which went about as well as you would expect. The artist says about 20% of people reject implants, but he doesn’t mention the upside, which is that up to 80% of the population could be wandering around with 3D dragon tattoos with horn implants. Just try putting a shirt on properly with one of those.

How many of you would get implants to *ahem* augment your cowgirl?

(via Scienceblog Aetiology) (image from canoe.ca)

One thought on “Boob jobs for tattoos”