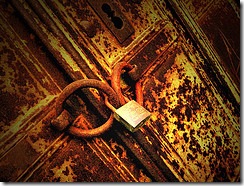 Canadian sf author Karl Schroeder brings our attention to an Australian judge who warns that technology has outstripped legislation’s ability to regulate it, and suggests that restrictions of use are best embodied into products themselves:

“The challenges that technology present continue to beat even the best legal minds in the world, Kirby said.

Despite this, lawmakers should attempt to implement checks and balances. Without them, corporations pose an even graver problem for humanity.

“To do nothing is to make a decision to let others go and take technology where they will. There are even more acute questions arising in biotechnology and informatics, such as the hybridization of the human species and other species. Points of no return can be reached,” he said.”

Within this legalese and obfuscation is, essentially, a defence of (and/or advocacy for) DRM-like technologies. Schroeder points out the logic flaws in his reasoning:

I think most people would prefer to live in a world where things are possible if not allowed, rather than the nightmare scenario of a world where many things simply can’t be done.

However, Kirby is wrong about one crucial thing.  Laws will not be expressed in their effective form through code; code does and will continue to effectively create law–without reference to the legal system.  Groups like the record companies and the RIAA are finding out this out now.

Technology is legislation, but it can’t be controlled on the level that Kirby is talking about.  Any attempt to do so can only result in Orwellian, and unintentionally hilarious, results (again, the entire current state of the music industry is both).”

Quite so. This will be an ongoing issue until we have people involved in the legal process who actually understand how technologies work. It’s also one of the reasons why Second Life is such a fascinating experiment – because, up until quite recently, it has been arguably the only MMO where code is not law. [Image by K?vanç]