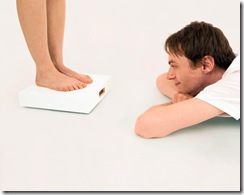 Isaac Asimov‘s robot stories were based around his famous Three Laws of Robotics, the first of which states that a robot may not injure a human being.

Asimov got lots of stories out of the many unanticipated behaviours his three laws might provoke in robots under various scenarios. His robots, though, were high-tech sentient creatures with “positronic brains.” I don’t think he ever contemplated applying his laws to everyday household products.

Designer Alice Wang has, though, and regarding Asimov’s First Law, wonders, “Are there existing domestic objects that already break this law?”, and comes up with a surprising answer–bathroom scales:

Scales, although don’t perform physical harm, have been subtly damaging us psychologically. Should objects like these exist in a complex society like ours where people are more emotionally fragile?

She has therefore designed three scales that might reduce the emotional harm caused by the mean old scale. The first, called white lies, allows the person being weighed to lie to him or herself: the further back you stand on it, the lighter you become. “The user can gradually move closer and closer to reality,” she notes. (Via Gizmodo.)

The second, called half-truth, can only be read by a person who is not on the scale: its readout is at the front edge, perpendicular to the floor. “Suitable for cohabiting partners,” notes Wang.

Finally, there’s open secrets, which doesn’t show you your weight at all: it sends a text message to a specified mobile phone, instead. The recipient of the message can then decide whether to share your weight with you immediately, the next time you meet–or not at all. “Suitable for pre-cohabiting couples,” says Wang.

Up next: the Heinleinian Starship Troopers scale, which will only consent to weigh you if you first serve two years in the military.