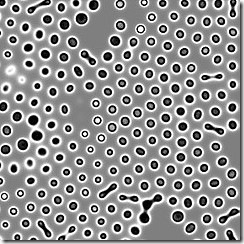 If I could choose one science fiction author in whose head-space I could spend a lengthy holiday (equipped with copious note-taking equipment and a barrel of synaptic cognition enhancers, naturally), Rudy Rucker would be my first choice by a country mile. Despite having a justified reputation as a quirky and colourful writer, he’s a ferociously smart guy. [image by JonDissed]

Here he is debunking the Singularity – or at least the “even better than the real thing” Singularity that some people advocate – by explaining that no Virtual Reality will ever be able to simulate Real Reality accurately, because Real Reality is already running on an incredibly complex and rich computational substrate:

“VR isn’t ever going to replace RR (real reality). We know that our present-day videogames and digital movies don’t fully match the richness of the real world. What’s not so well known is that computer science provides strong evidence that no feasible VR can ever match nature. This is because there are no shortcuts for nature’s computations. Due to a property of the natural world that I call the “principle of natural unpredictability,” fully simulating a bunch of particles for a certain period of time requires a system using about the same number of particles for about the same length of time. Naturally occurring systems don’t allow for drastic shortcuts.”

Rudy Rucker – substantial proof (if proof were needed) that science and hippiedom are two sides of the same coin. There’s masses of free fiction and non-fiction on his website, by the way.