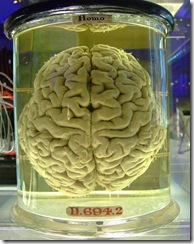 In old science fiction movies, mad scientists and the like always seem to have, somewhere around their lab, a brain in a jar.

I never much saw the point of that. How about something really useful: an immune system in a jar? (Via New Scientist Invention Blog.)

Invented by George Lewis, a virologist at the University of Maryland, this simple replica immune system would allow scientists to test vaccines in the laboratory to make sure they trigger the production of antibodies, without having to take the sometimes dangerous step of actually testing the vaccine in a living human being. This could greatly speed the process of producing new vaccines.

Mad scientists, however, will probably want to stick with the old brain-in-the-jar: cultured white blood cells just don’t have the same visual impact.