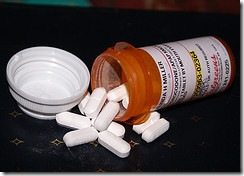 Of all the rumours coming in from the O’Reilly Emerging Technology Conference this year (my complimentary tickets for which obviously got lost in the mail somehow, worse luck), I’ve been most intrigued by Quinn Norton‘s talk – and I’ll bet we’ll be hearing a lot about it from the transhumanist bloggers in the next few days, too.

Apparently Norton discussed the potential of new cognitive drugs and body augmentation to produce a “second Enlightenment” – a global stimulation of intellectual pursuits that might encourage seditious thoughts and behaviour, much to the consternation of repressive governments. [image by ninjapoodles]

I can see what Norton is saying, and I have a certain sympathy. But it’s hardly a new idea, though; look back at rave culture in the late eighties and early nineties here in the UK, or Douglas Rushkoff’s early books, and you’ll see similar ideas being advanced. But the internet wasn’t even out of its infancy at that point, so things are arguably different now – if only at a the level of global interpersonal communication.

What do you think – is Norton a harbinger of change, or a wide-eyed techno-utopian?

[ PS – if anyone finds an audio recording or YouTube video of Norton’s talk, please send Futurismic the link via the Contacts page and we’ll put it up here for everyone to enjoy. ]

8 thoughts on “Smart drugs and body-mods to usher in a new Enlightenment?”