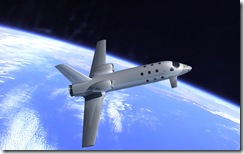 Astrium, the division of the European aerospace company EADS that makes the Ariane rocket, plans to mass-produce a commercial vehicle to take passengers on jaunts above the 100 km altitude that marks the edge of space. (Via BBC.)

Astrium’s market assessment suggests there would be 15,000 people a year willing to pay 200,000 euros for the trip, enough to support a production line turning about about 10 spaceplanes a year.

Robert Laine, CTO of EADS Astrium, announced while delivering the 99th Kelvin Lecture at the Institution of Engineering and Technology in London.

Astrium doesn’t intend to fly the craft itself, but supply them to companies that want to start up a space tourism business.

How far along are they? They’ve done wind-tunnel testing; and run the rocket engine for up to 31 seconds. The plan is for the four-passenger, single-pilot craft to take off using regular jet engines, climb to 12 km, then ignite the rocket to shoot straight up, climbing beyond 60 km in just 80 seconds, then riding its velocity to the 100 km level and beyond.Once it has re-entered the atmosphere, the jet engines take over again for the landing. (Watch an animation: I particularly like the opening text of “Until now, the closest you could get to your dream of travelling into space was to immerse yourself in a good science fiction novel…”)

Laine believes this is the first step toward super-fast intercontinental passenger transporters:

“Today we don’t know how to go to space cheaply. Being able to climb on a regular basis to 100km will give us the motivation to develop the plane that goes, not just up and down to the same place, but from here to the other side of the Earth.

I’d love to ride one of these things…but not for 200,000 euros. Give it time, though, and the price will surely come down.