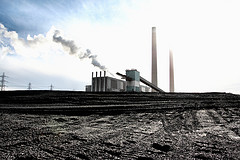 We’ve all heard about Peak Oil, but mineral hydrocarbons aren’t the only thing that could run out on us sooner than we think. The world is a complex place full of interrelated dependencies (a bit like a Linux install, come to think of it), and there are lots of other essential resources that, with a bit of bad luck, could dwindle or vanish very quickly. [image by The Tardigrade]

Jamais Cascio points out that resource collapse will be one of the most important driving forces of the near future – not just technologically but geopolitically, too:

“Resource collapse isn’t the cause of the rise of the post-hegemonic world, but it’s an important driver. It weakens the powerful, and opens up new niches of influence. It triggers conflict, setting the mighty against the mighty. It reveals vulnerabilities.

Most importantly, it sets up the conditions for the emergence of new models of power, as ultimately the most effective responses to resource collapse will come from revolutions in technology and socio-economic behavior. Those actors adopting the new successful models will find themselves disproportionately powerful.”

Adapt or die, basically. But what will Nation-States2.0 look like?