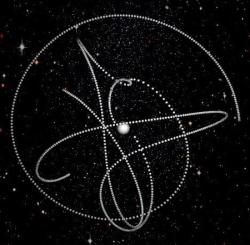 A mix of two stories about completely different types of Black Holes today. First, researchers at the Rochester Institute of Technology found that interactions between three black holes should produce gravitational waves that detectors like LISA or LIGO could detect within the next ten years. Gravitational Waves are ‘ripples’ in Space-Time caused by massive objects and events and could tell us a great deal about the big bang.

Another kind of black hole in the news is the ‘internet black hole’. Researchers for the Hubble internet project found distinct pathways on the internet where data was lost for unexplainable reasons. The project, which you can see the results of at their website, was intentionally named after the famous astronomer and telescope. The researchers say they are performing ‘internet astronomy’, looking for events in the cosmos of data that is the internet.