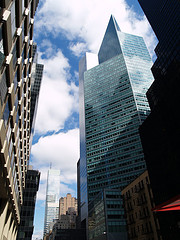 Via the one and only Bruce Sterling, here’s a post that’s remarkably bullish about the potential of web-reality mash-ups like Google Transit to revolutionise urban life:

“… once the knee-jerk paranoia passes, the benefits begin to sink in. With live-feed transit information, Google Maps and Google Earth could eliminate the need for standing on a windy or snowy street corner for twenty minutes, waiting for a late bus. Outside it could be pouring rain, but you’d know exactly when to leave the house to catch your train.”

But it just gets better!

“At City Hall a few weeks later, the general happiness trend of your neighborhood is noticed to be on the rise. Civic officials study the area to learn why this spike in aura has been occurring, and use this people-powered live information to liven up some less brightly-colored spots on the map.”

It’s interesting to see this sort of positive spin on matters, as opposed to the usual privacy FUD. Even so, utopias rarely work out the way they’re meant to – how would this sort of urban planning affect the disenfranchised and the poor? [image by eyeliam]

3 thoughts on “Urban mapping – prepare for the cartographolution!”