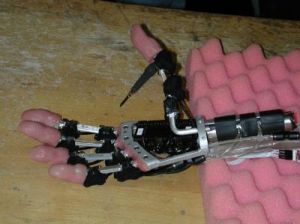 Via Warren Ellis’s grinders, I present to you: the Fluidhand!

“The flexible drives are located directly in the movable finger joints and operate on the biological principle of the spider leg – to flex the joints, elastic chambers are pumped up by miniature hydraulics. In this way, index finger, middle finger and thumb can be moved independently. The prosthetic hand gives the stump feedback, enabling the amputee to sense the strength of the grip.”

Prosthetics and exoskeletal tech are really making strides (arf!) at the moment. I don’t think it’s science fictional to suggest that we’ll be seeing prosthetic limbs that equal the functionality of the organic originals within a decade. [image borrowed from linked Physorg article]

But there’ll still be a stigma attached to having one, because of the aesthetic issues; it’ll be longer than a decade before there’s a false limb that would pass for a real one.

Maybe they’d become a badge of pride in certain industries or regions – among veterans of ideological conflicts, perhaps? And what about the possibility of elective prosthetics – people choosing to replace limbs that had nothing wrong with them?