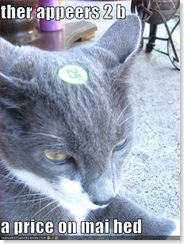 Ooh, this combines two of my favorite things:  languages and the future.  John Scalzi’s grammar bitch of the day (granted, that day was a while ago) touches on one of those small spelling differences, specifically ‘alright’ vs ‘all right’.  While I disagree with Mr. Scalzi on this point (‘alright’ is  usable as that Lichtenstein art he has up, though I’d ask somebody “Are you all right?”), it’s something to think about when discussing the differences between English spellings.  I’ve spent all day today trying to explain to Japanese eight-year-olds why I say “zee” and my co-worker says “zed.”

Garance wonders if the proliferation of an unedited Internet might not bring about a return to the writings of previous centuries, when men wore hose and words were spelled phonetically:

As blogs move us into a less heavily copy-edited world, I sometimes wonder if we’re moving back into a more 16th and 17th century form of writing, where the idea of correct spelling was less important than the communication of meaning — which, in reality, can be accomplished just as well with incorrectly spelled words and homonyms as with a more perfect language. And also: as we move ever deeper into this new world of speech-like writing, will the perfect, formal language of the page one day seem as antique and elaborate as Victorian silverware?

What say you all?  I’m a stickler for spelling and grammar (though I muck it up a fair bit), but I can definitely see a return to a more homonymic age. (funny, lowercase ‘internet’ doesn’t pass my spellchecker, but ‘homonymic’ does just fine)

(image from lolcats, of course)

7 thoughts on “The future of English”