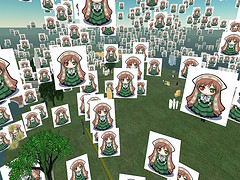 You may remember us linking to an arm-waving FUD-hype article from Australia last year claiming that OMFG Secund Life iz training ground for terr’ists!!1!

Just in case you were still worried about that (and I’m sure it’s been keeping you awake at night just as much as it has me) a report from Mercyhurst College concludes we can breathe easily:

“Communication for planning a terror attack is unlikely to be a threat due to the paranoia, suspicion of monitoring, and existing channels of communication such as web forums that are more efficient. Bomb making, weapons training, and other advanced training exercises are unlikely to take place in SL due to the need for in-person, hands-on experience.”

I wonder how much that simple exercise in examining the platform and applying a little common sense cost? It would have been easier to simply round up a hundred SL users and ask them the same question … although in recent times I think you’d be hard pressed to find a hundred SL users who’d been able to log in with any degree of regularity, but that’s an answer in and of itself. [image by believekevin]

And seriously, come on – Islamic jihadists in the metaverse? What were they supposed to be training themselves to do, bombard decadent capitalists with swarms of animated penises? That’s about as plausible as, oh, I dunno, Nazis on the frickin’ moon.

One thought on “Second Life not actually crawling with terrorists after all – who knew?”