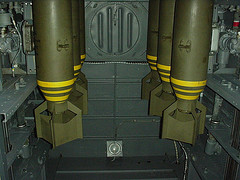 More botnet news, this time in the form of military fist-shaking bluster! Here’s an article [via SlashDot] in the Armed Forces Journal that suggests the US military apparatus should build its own botnet for “the ability to carpet bomb in cyberspace”:

“The time for fortresses on the Internet also has passed, even though America has not recognized it. Now, the only consequence for an adversary who intrudes into or attacks our networks is to get kicked out — if we can find him and if he has not installed a hidden back door. That is not enough. America must have a powerful, flexible deterrent that can reach far outside our fortresses and strike the enemy while he is still on the move.”

If I’m not very much mistaken, Colonel Williamson has only partially grasped the whole “internet as a non-locational space” thing.

“As much as some think the information age is revolutionary, local networks and the Internet are conceptually similar to the ancient model of roads and towns: Things are produced in one place and moved to another place where they have more value.”

Well, yes – things are produced in one place, sometimes (er, crowdsourcing?). But with the web, that thing can then be everywhere, all at once. Data is an infinite good. Colonel Williamson’s talk about roads-and-towns and “states competing against one another” goes a long way toward suggesting why traditional military organisations have struggled to combat terrorism – they simply don’t have a clue how it (or the internet) works.

But back to the carpet-bomb botnet – Colonel Williamson says that “[t]he U.S. would not, and need not, infect unwitting computers as zombies.” Instead, he thinks it best that the power be built up legitmately – which, again, kind of misses the point of a botnet, in that they’re designed to leverage an amount of hardware that would be financially impractical to buy, build and maintain. [image by TailspinT]

Here’s a better idea – how about a kind of “Milnet@home” project? Show your love and pride in your nation by letting it use some of your spare cycles for smiting the enemy! Come on – you’d trust Uncle Sam with your computer, wouldn’t you?