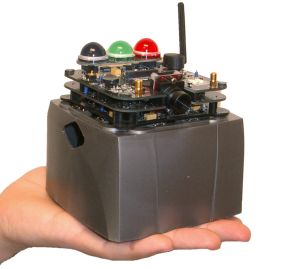 No, it’s not the title of a new YA science fiction novel. James McLurkin is a researcher at the MIT Computer Science and Artificial Intelligence Lab, which has to be one of the most awesome jobs I can think of.

He’s interested in swarm robots (which we’ve mentioned here on Futurismic before, sometimes in a military context), and believes that the future of robotic development is modular, because it allows researchers to design and develop complex robots quickly and cheaply.

Chris Kiick of Hack-a-Day went to see a demonstration of McLurkin’s swarm robots, of which I am quite jealous. Apparently McLurkin has over a hundred of these things, though he only takes about a dozen out for shows to do tricks like “circle-the-wagons” and physical bubble-sorts. Even so, my inner geek suspects it’d still whip the hell out of a night at the comedy club.

You can find out more about McLurkin’s research at his own MIT website; there’s plenty of video of his swarm in action, also.

2 thoughts on “McLurkin and the Robot Swarm”