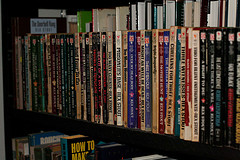 Over at io9, Charlie Jane Anders digs for the root cause of an accepted truism of genre (and, I think, all) writing: the longer a series gets, the more it starts to suck.

I guess you could put it down to the law of diminishing returns, which is far from being exclusive to media and entertainment. But whatever the cause, there are a number of cases where all but the most ardent uncritical fanboy starts thinking “you should have let it be”. [image by deadeyebart]

Anders uses the obvious (but extremely valid) example of the seemingly endless Dune saga; while I’ll agree that Frank Herbert‘s sequels were less than brilliant, their level of suck completely pales when held up against the Brian Herbert and Kevin J Anderson continuations.

Personally, as much as I’d jump in front of a speeding train for Douglas Adams it was plain to see by the last few Hitchhikers books that he should have moved on and focussed on some of his other ideas. Also, dreadful sequels and series in general are the main reason I gave up television completely eight years ago.

And if you want uncompromising sequel-rage, you should try asking Jonathan McCalmont about Laurell K Hamilton’s Anita Blake books …

What are the sequels you love to hate? And which ones have you continued with – despite the suck?