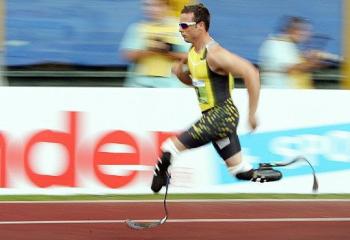 In a landmark ruling by the Court of Arbitration for Sport, South African athlete Oscar Pistorius – nicknamed ‘Bladerunner’ after the carbon-fibre prosthetics he uses in place of his amputated lower legs – has won the right to compete against able-bodied athletes, and plans to represent his country at either the Beijing Olympics or the later London event. [image taken from linked article]

From a purely technological perspective, it’s fantastic that we can replace a man’s missing limbs and allow him to run at all, let alone run at record-breaking speeds.

But here’s George Dvorsky explaining why he believes Pistorius shouldn’t be permitted to compete against regular non-enhanced athletes:

“The short answer is that it’s not fair to the able-bodied athletes who don’t want to get into the enhancement game.

Moving forward, it sets up a situation where:

Read the whole piece before making your mind up; it won’t take you long.

I’m not sure where I stand on this issue, because our species-wide fascination with competitive sports has always baffled me completely; I guess I don’t care who runs in a race, enhanced or otherwise. As long as it isn’t me. 😉

But bearing in mind how financially lucrative the sports industry is, I can see Dvorsky having a point. After all, it’s not as if his second point doesn’t describe a situation that already exists in the present with regards to drugs and dietary supplements, without any pressure from cyborg athletes in the same leagues.