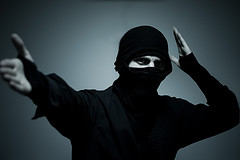 There’s a lengthy (but well worth the read) article at COSMOS Magazine about the prospect of functional human immortality, which – thanks to fairly recent scientific advances – now looks plausible as opposed to impossible. Unlike many articles of its kind, it looks at the psychosocial implications of such a change:

“Our relatively brief lives and our routine proximity to the deaths of ourselves and others are the foundations of everything we have ever thought or believed. Neither religion nor philosophy necessarily promises immortality, but each offers ways of coming to terms with or giving meaning to death and, therefore, life. If death is to be postponed indefinitely, then both religion and philosophy face fundamental crises.”

Well, at least we’ll have the leisure time to talk it all out! [image by brunkfordbraun]

On the flip-side, an article at Wired takes a look at a new computer game wherein the bodies of your slain opponents don’t disappear:

“Over the years, I’ve noticed that most of the seriously violent games I love deal with the corpses by simply whisking them away. […] After I’d killed my way through about seven battles, I experimentally backtracked all the way to the beginning, and sure enough – every body was still lying there, every blood fleck on the ceiling intact.

Now, did this change the emotional, or even moral, timbre of the game?

In some ways, yes. You really do get a better sense that you’re a sociopath when the evidence of your crimes is stacked around you.”

Perhaps, rather than being the training grounds for murderers that some might claim them as, violent games could actually encourage their players to think harder about the consequences of their actions in the real world? That could come in handy – especially if we ever find we can live forever.