Self-replicating machines, as a concept, have been around since mathematician John von Neumann thought them up. But there has never been a working non-organic machine that has been able to construct a fully-functional working clone of itself … until now. [story via pretty much everywhere; image from the RepRap homepage] 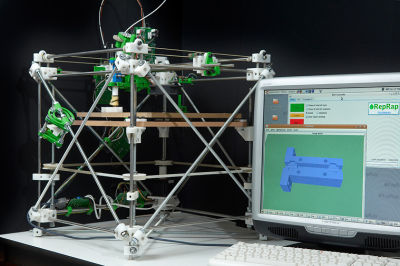 I’ve linked to the RepRap Project before when I first started blogging here at Futurismic, and so I’m immensely pleased to see they’ve reached this major milestone. And the head-twistingly awesome bit about it is that, as RepRap is 100% open-source, you can just download a parts list and make your own, then set it to make copies of itself to give to your friends.

“The machine that [self-replicated] – RepRap Version 1.0 “Darwin” – can be built now – see the Make RepRap Darwin link, and for ways to get the bits and pieces you need, see the Obtaining Parts link.”

OK, so it looks clunky, and it lacks the conceptual elegance of Drexler’s engines of creation, but think of it as a proof of concept. Imagine that RepRap could build a functional replica of itself at half the size, and that then the replica could replicate to half the size again, and so on. Unless you’re worried about the largely improbable “grey goo” scenario, it’s possible that we’ll look back on RepRap as the dawn of a new age for the means of production …

… or the root cause of global unemployment, maybe. 😉