A recent topic of interest in the reputable journals of opinion, including Wired Magazine and The Independent has been the possibility of artificially enhancing human intelligence. Methods suggested include Viagra for your Brain, or nootropics: drugs that are thought to enhance intelligence and cognitive ability.

Examples include ritalin, a drug used primarily to help ADHD sufferers which is also claimed to promote alertness and concentration in healthy people, and modafinil, a drug designed to combat sleep disorders but which is also being used to extend the period for which people can stay awake and active.

Fortunately there are also options for squares like myself who don’t have the guts to pop pills bought on the Net: algorithmic approaches to learning, and most recently the possibility of boosting IQ by enhancing fluid intelligence:

Most IQ tests attempt to measure two types of intelligence–crystallized and fluid intelligence.

Fluid intelligence, on the other hand, draws on the ability to understand relationships between various concepts, independent of any previous knowledge or skills, to solve new problems.

The research by brain boffins Susanne M. Jaeggi and Martin Buschkuehl appears to occupy the class of scientific experiments entitled confirming the bleedin’ obvious (facetiousness aside, this is of course as necessary and laudable as any scientific endeavour :-)) :

Researchers gathered four groups of volunteers and trained their working memories using a complex training task called “dual n-back training,” which presented both auditory and visual cues that participants had to temporarily store and recall.

Participants received the training during a half hour session held once a day for either eight, 12, 17 or 19 days. For each of these training periods, researchers tested participants’ gains in fluid intelligence. They compared the results against those of control groups to be sure the volunteers actually improved their fluid intelligence, not merely their test-taking skills.

The results were surprising. While the control groups made gains, presumably because they had 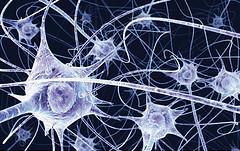 practice with the fluid intelligence tests, the trained groups improved considerably more than the control groups. Further, the longer the participants trained, the larger were their intelligence gains.

“Our findings clearly show that training on certain memory tasks transfer to fluid intelligence,” says Jaeggi. “We also find that individuals with lower fluid intelligence scores at pre-test could profit from the training.”

So practice makes you better, if not perfect. As I’ve mentioned before, combining a better understanding of learning methods with drugs that have a direct affect on cognitive ability will have a huge impact on life over the course of the next century, even changing what it means to be human.