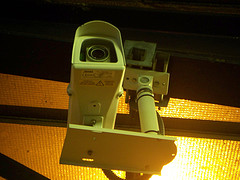 Since 9/11, the government’s use of video surveillance on the public has increased dramatically (this opens a new window with a .pdf). While the vast majority of this surveillance has been implemented to “protect the country from another 9/11-style attack”, it has been used in other arenas as well, namely in attempts to catch wanted criminals. It’s effectiveness in such a capacity is questionable at times, and the effects of such surveillance on society is noteworthy [photo courtesy of kafka4prez].

However, companies like 3VR – one of the largest surveillance software and video-analysis producers in the world – have begun development of increased-privacy software that would seek to protect innocent people from being falsely targeted by authorities. Their software is hoping to visible blur every face in video surveillance unless an investigation requires that the people in the video be identified. It seems like a small step in the right direction to counter the immense violations by the NSA not too long ago, but at least it’s something.