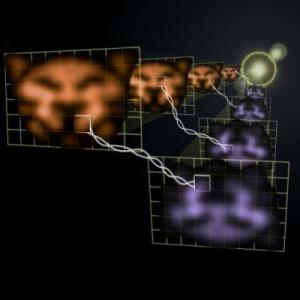 Researchers at the Commerce Department’s Joint Quantum Institute (JQI) and the University of Maryland have used laser beams to produce less “noisy” images, according to Science Express via Science Daily. The experiment could lead to better computers and information-storage. The images are born in pairs, “like twins separated at birth,” at slightly different frequencies. None of that is necessarily weird, but:

Look at one quantum image, and it displays random and unpredictable changes over time. Look at the other image, and it exhibits very similar random fluctuations at the same time, even if the two images are far apart and unable to transmit information to one another. They are “entangled”–their properties are linked in such a way that they exist as a unit rather than individually.

The photo-montage of quantum cats is made from color-treated images used in the experiment. The lines suggest how entanglement occurs. What else could we do with quantum entanglement? It would be fun to make entangled drawings or paintings.