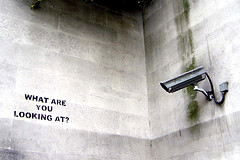 Four young residents of a North Philadelphia house who circulated petitions questioning police-surveillance cameras were rousted from their home Friday and detained 12 hours without charges while police searched their house…. 9th District Police Capt. Dennis Wilson…was quoted …as saying of the residents: “They’re a hate group. We’re trying to drum up charges against them, but unfortunately we’ll probably have to let them go.”

If they have nothing to hide, they shouldn’t be asking questions.

[Thanks, Eschaton; London ’05 photo by nolifebeforecoffee]