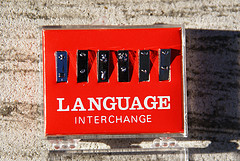 “To have another language is to possess a second soul,” Charlemagne supposedly said, possibly in a Germanic dialect of the Franks. That certainly implies another personality, which is what researchers in the Journal of Consumer Research report observing in a study of bicultural, bilingual women.

…[W]omen classified themselves as more assertive when they spoke Spanish than when they spoke English. They also had significantly different perceptions of women in ads when the ads were in Spanish versus English. “In the Spanish-language sessions, informants perceived females as more self-sufficient and extroverted,” write the authors.

The researchers say the shift, which seems to occur unconsciously, could have implications for political and purchasing choices. Not to mention an interesting side-effect to a shrinking world.

4 thoughts on “Change your language, change your personality?”