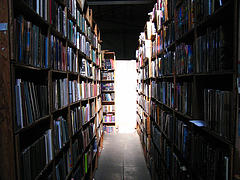 Depending on who you ask, recent changes in the book publishing landscape are either great news or a calamity. What’s not so certain is the cause of the change, but a blogger at The Economist has a theory – the same technological factors that have flattened the music industry sales curve have made the book market more spiky:

Our cultural consumption exists on a spectrum from “individual” to “collective”. Technology has shifted the balance for both books and music. Digital distribution and the iPod have made music consumption much more individualistic, while the internet and global branding have made book consumption increasingly collective.

This is very easy to blame on chain bookstore business models – there’s plenty of evidence to support the assertion. But as this piece at The Guardian points out, the boutique bookstore is still a viable proposition … again, counterintuitively, partly thanks to the internet (though it helps to have a strong brand identity from the outset):

Each independent has its own survival strategy. Ours has been to stock not just those titles our core customers would expect to find, but to second-guess those customers and offer books to surprise and excite them (what Gabriel Zaid calls “a fortunate encounter”). That in itself is not enough, which is why we set out from the very beginning to establish an involved community …

Still, at least fiction publishers can be thankful that – for the moment at least – the price of a novel isn’t high enough to make peer-to-peer piracy a serious threat. The same cannot be said for the $100 academic textbook, however. [first two links via Cheryl Morgan, latter link via Slashdot] [image by Soul Pusher]

2 thoughts on “The economics of book retailing”