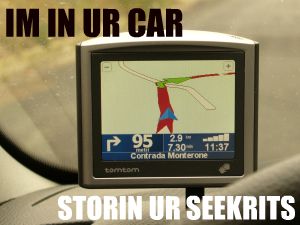 Happy Independence Day, America! I expect you’ll be busy making loud noises with explosives and generally partying it up this weekend, and I don’t begrudge you that*. But here’s some advice – if at some point you should decide to take a little drive somewhere to do something you maybe shouldn’t do, turn off the TomTom. [LOLnav based on an image by pizzodisevo]

You see, it turns out that not only does your satnav tell you how to get from A to B, it remembers where A and B were, when you travelled between them, and where you drove through on the way. Plus, if you’ve linked your phone to it via Bluetooth, it’ll have a record of every call and text message you made during the journey.

This isn’t a standard feature, obviously; it takes a detective with some good tech sk1llz0rz to tease out the old files, and now this has been revealed (by the superbly-monikered Beverly Nutter of London’s Metropolitan Police, no less) we can expect the same hacker enthusiasts who found the vulnerabilities to find a way of closing them.

So, just another front-line skirmish in the of the war between technology and privacy … but then if you’re doing nothing wrong, you have nothing to fear, right?

[ * Actually, I do kinda begrudge you it; the closest we Brits have to Independence Day is Guy Fawkes Night. I’ve always clung to the explanation for burning Fawkes in effigy that a slightly inebriated friend of my father’s told me when I was about twelve: “We’re not burning him for trying to blow up the government, Paul; we’re burning him because he failed.” Happy 4th July! ]