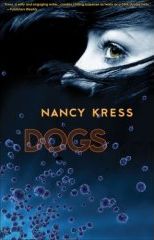 While probably best known for her seminal sf story “Beggars In Spain” and the novel it grew into, Nancy Kress has authored twenty-three books (including thirteen sf novels), and won at least one of every short fiction award worth having in the science fiction field.

Her newest novel – a technothriller entitled Dogs – is about to hit bookstores everywhere in the middle of this month. Futurismic was proud to be offered the chance to ask Nancy some questions about Dogs, her writing in general, and – as it’s a subject that plays a strong part in much of her fictional output – genetic engineering and biotechnology.

PGR: You’ve been writing about genetic engineering and its consequences in your novels for quite some time now. What was it about the field that initially sparked your interest?

Nancy Kress: What interests me is that this – unlike, say, FTL – is the future happening right now. Food crops are already being massively engineered (despite all the political problems with this); so are animals. Even humans have taken the first step by genescanning in vitro embryos in fertility clinics and choosing among them for implantation in the womb.

In addition, we have the techniques for silencing or replacing genes – we’ve been using them for a long time to create knock-out mice for research purposes. We know how to do genetic engineering. And what humanity knows how to do, eventually it does. What could be more exciting – and alarming – than standing on the thresh hold of taking charge of our own evolution?

PGR: Developments in biotechnology are moving very quickly now, with some pundits claiming that biology will be able to step in when Moore’s Law runs up against its physical limits. I know that science fiction writers aren’t in the business of making predictions, but can I tempt you to share what you think the short-range developments of the next couple of decades might bring?

Nancy Kress: Two things: First, as food shortages develop, more countries will loosen their restrictions on genetically engineered crops (although not without a lot of shouting).

Second, the choosing of some embryos over others, now done mostly to avoid those carrying hereditary diseases like Huntingdon’s or Tay-Sachs, will move to the next stage. As we discover which genes encode for which proteins, parents will be able to choose identified traits. There’s still no genetic engineering involved – just genetic choosing.

The third step is the engineering of genes in egg, sperm, or embryo. I wouldn’t hazard a guess about how far down the road that will be. The considerations are not technical, but political, religious, and ethical.

Nancy Kress: The most over-hyped, without question, is the European hysteria over “Frankenfoods” (as one pundit put it: “There’s a monstrous prefix stalking Europe.”) It’s a little hypocritical since, for instance, that the French ban the import of genetically engineered canola oil from Canada, but permit the use of genetically engineered bacteria in the making of French cheese. I have read that some of the bacteria ends up in the cheese, while the high-heat processes of making the canola oil destroys the engineered DNA completely. This sort of contradiction looks a lot like trade protectionism rather than ethics decisions.

But there are definitely real dangers to genetic engineering. Experimenting on human embryos that may live raises troubling ethical issues. Reducing biodiversity through over-reliance on successfully engineered crops could create ecological problems (although we do have the alternate seeds stored in the World Seed Bank in Scandinavia.) There are the potential social problems I wrote about in Beggars In Spain. Genetic engineering is a tool. Like all tools, it has the potential for abuse. The day that Man discovered fire, the crime of arson became a possibility.

PGR: You’ve also written a number of novels featuring human relations with alien species; what freedoms do you most enjoy as writer using that particular metaphor?

Nancy Kress: It’s difficult to create truly alien aliens, and usually not very rewarding; unless they overlap with us in some area, how can we communicate with them? That overlap means that writers can choose what aspects of human nature they wish to emphasize or comment upon, and create it in their aliens. This confers a great freedom to explore all sorts of things. Aliens ‘R Us.

PGR: How do you think we would react as a species to a sudden resolution of the Fermi Paradox, in the form of an unambiguous signal or sign of live from another civilisation?

Nancy Kress: The reactions, it seems to me, would be as varied as human beings. There would be no “reaction as a species.” Instead, various people (some of them influential political leaders) might feel: joy, fear, shock & awe, anger (“Get out! It’s our planet!”), expediency (“What have they got that we can trade for?”), caution, curiosity, proof of God, proof of no God, xenophobia, xenophilia, panic, the missionary impulse, inferiority, and the desire to pass more laws.

PGR: Give us your ‘elevator pitch’ for Dogs – who is it aimed at, and why will they enjoy it?

Nancy Kress: Dogs in a nutshell:

An unknown virus has turned up in dogs in Tyler, a small town on the Maryland-West Virginia border. Like rabies, the virus crosses the blood-brain barrier, turning formerly calm pets into aggressive killers. The government throws a quarantine around Tyler and brings in the CDC. Law enforcement begins rounding up dogs, including those that may have been infected but aren’t yet showing signs of the disease.

It’s one thing to kill a billion chickens in Asia to try to contain avian flu; it’s another to ask Americans to surrender pets. Many people in Tyler want their dogs left alone. Many people want the dogs all euthanized. Many on both sides are armed.

The action in Dogs is seen from varied viewpoints: the local Animal Control Officer. A boy trying to hide his pet. A widowed ex-FBI agent who becomes more involved than she ever thought she would be. And a man who knows what’s really going on.

Publisher’s Weekly gave Dogs a glowing review, calling it “spine-chilling….Kress brings her thorough knowledge of genetics and biology to bear in this nicely creepy thriller.”

PGR: I notice that Dogs is being billed as a bio-thriller; was this a deliberate choice on your part, representing a departure from your usual sf-nal style? If so, what inspired this new direction with your writing?

Nancy Kress: I’ve actually published two bio-thrillers before: Oaths and Miracles (Tor/Forge, 1996) and Stinger (Tor/Forge, 1998). I like the genre. It has a small bit of SF but takes place in the present. It’s not so much a new direction as it is a different lens from which to view the same questions that I tackle in my farther-into-the-future SF.

PGR: What new challenges did you discover in writing about the near-present as compared to the more distant future?

Nancy Kress: It’s easier to write in the present in that, obviously, you don’t have to do all the extrapolation. But it’s harder in that you must get the details right. The FBI, for example, is structured in a certain way now. A future FBI might be structured differently and so you can take some liberties in future SF, but not in stories set in the present. So there’s much more research involved into government agencies, current laws – things like that. I’ve written about the FBI before, so I did already know some of it.

PGR: Some writers have said that it’s getting harder to write believably about the future – do you agree, and if so, what do you think is the cause? Is it the world, or the writers themselves?

Nancy Kress: I don’t see why it should be harder or easier than it ever was. This assertion has never made sense to me.

PGR: I assume that someone as active as yourself in short fiction keeps a keen eye on the markets – where do you stand on the “short fiction is dying” debate? Where do you see the form being published in ten year’s time?

Nancy Kress: Actually, I don’t keep as close an eye on markets as I should, mostly because my stories all go to ASIMOV’S, JIM BAEN’S UNIVERSE, or whatever anthology invited me to write a given story. I certainly don’t think short fiction is dying in terms of quality. In terms of marketing, we seem to be in a transition period between print and such formats as on-line fiction and e-readers like the Amazon Kindle. It will be interesting to see how that all plays out.

PGR: And finally – SF seems to be predominantly a genre of cat lovers. Discuss! 😉

Nancy Kress: I don’t quite understand this. But, then, I have a dog – the world’s most spoiled toy poodle, seven-and-a-half pounds of lethally cute wilfulness. I put her in Dogs. You can meet her there! 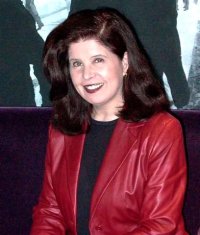 You can find out more about Nancy Kress at her SFF.net homepage. She has also recently given an interview to the Feminist SF blog, and discussed Dogs over on Scalzi’s Whatever, both of which we heartily recommend you read as well.

Futurismic would like to take this opportunity to thank Nancy for answering our questions, and Matt Staggs for organising it all.

One thought on “Why Nancy Kress has gone to the Dogs”