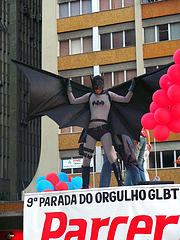 You could train somebody to be a tremendous athlete and to have a significant martial arts background, and also to use some of the gear that he has, which requires a lot of physical prowess. Most of what you see there is feasible to the extent that somebody could be trained to that extreme. We’re seeing that kind of thing in less than a month in the Olympics.

Most of the time, in the comics and in the movies, even when he wins, he usually winds up taking a pretty good beating. There’s a real failure to show the cumulative effect of that.

If you’re thinking of superheroing, stay off the steroids.

There is one comic where he did go on steroids. He went a little crazy and he went off them again.