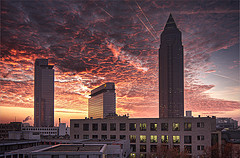 Games can be a great tool for learning and for developing new ideas. Hence the Institute for the Future‘s new “forecasting” game, Superstruct – it’s a roleplaying game acted that will be acted out on blogs and social media platforms from September 2008. Here’s a snippet from the FAQ:

A: Superstruct is the world’s first massively multiplayer forecasting game. By playing the game, you’ll help us chronicle the world of 2019–and imagine how we might solve the problems we’ll face. Because this is about more than just envisioning the future. It’s about making the future, inventing new ways to organize the human race and augment our collective human potential.

Q: What does ‘superstruct’ mean?

Su`per`struct` v. t. 1.To build over or upon another structure; to erect upon a foundation.

Q: How do I play Superstruct?

A: Superstruct is played on forums, blogs, videos, wikis, and other familiar online spaces. We show you the world as it might look in 2019. You show us what it’s like to live there. Bring what you know and who you know, and we’ll all figure out how to make 2019 a world we want to live in.

Via Jamais Cascio, who’s been involved in developing the idea, you can read the full Superstruct press release on the IFTF website.

It’s an interesting idea, and very in line with Futurismic‘s mission, because it’s encouraging people to apply science fictional thinking to a very plausible near-future scenario… and to do so with a purpose, namely inventing a future where we don’t snuff ourselves out as a species. [image by Philipp Klinger]