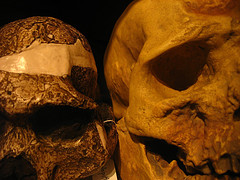 Anthropologists have long disagreed on the timing of the emergence of language in our hominid ancestors, and the results of recent research may reignite that debate. CT scans of a 530,000-year-old Homo heidelbergensis skull show that its ear canals are sensitive at 2kHz to 4kHz – the same crucial information-rich frequency range that we modern humans are attuned to – suggesting a much earlier emergence of language than commonly accepted. [via SlashDot] [image by Orin Optiglot; no, they’re not Neanderthal skulls]

Of course, like a great deal of anthropological speculation, it’s educated guesswork:

The results don’t necessarily show that the ancient humans could speak, Quam says. “We’re saying that the ear changed for some reason and that those changes facilitated the possibility of language development…”

Researchers have long tried to determine whether Neandertals could speak by reconstructing their vocal tracts, Quam says. But soft tissue makes up most of the voice box, so few traces remain in the fossil record. The ear is a better candidate because the bony structure reveals more about hearing capacity.

Couple this with the recent discovery that Neanderthals also had a gene which governs the development of language and is only found in modern humans, and we start to get a picture of our distant ancestors that differs considerably from the grunting caveman stereotype.