Suggestions for what exactly to do with the International Space Station are always welcome. Michael Benson, writing in The Washington Post suggests sending it to the Moon:

The ISS, you see, is already an interplanetary spacecraft — at least potentially. It’s missing a drive system and a steerage module, but those are technicalities. Although it’s ungainly in appearance, it’s designed to be boosted periodically to a higher altitude by a shuttle, a Russian Soyuz or one of the upcoming new Constellation program Orion spacecraft.

This seems a little crazy, but then so does spending $156 billion on the ISS in the first place (check out the discussion on Slashdot about the technical side of it). As it is, we don’t seem to be getting much in the way of tangible benefits from the ISS. As Michael Benson points out:

But if the station’s goal is to conduct yet more research into the effects of zero gravity on human beings, well, there’s more than enough of that already salted away in Russian archives, based on the many years of weightlessness that cosmonauts heroically logged in a series of space stations throughout the 1970s, ’80s and ’90s. By now, ISS crews have also spent serious time in zero gravity. We know exactly what weightlessness does and how to counter some of its atrophying effects. (Cue shot of exercycle.)

In any case I’m fairly cynical about the medium-term benefits of human space travel. We have enough trillion dollar problems here on Earth without wasting money on white elephants like the ISS. 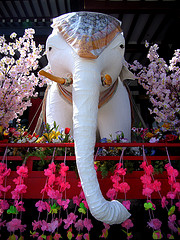 I agree that people need frontiers and visible symbols of human progress. To inspire a sense of wonder about the universe is very laudable, but surely we are not so unimaginative as to be unable to find other, less literal, frontiers than space?

Advances in biology, neuroscience, and computer science can provide enough sense-of-wonder to keep everyone happy. Also these areas are much cheaper to pursue (in comparison to space travel) and have the potential to yield much more practically useful results.

Purely scientific study can be pursued by unmanned probes without going to the expense of transporting tin-cans full of hominids billions of kilometres to plant a flag.

3 thoughts on “White elephants… IN SPACE!”