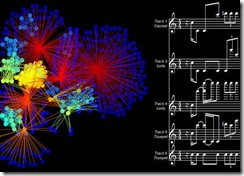 Computers are very useful for analyzing large quantities of data, but presenting that data to humans in a useful form is an ongoing challenge. (A challenge that predates computers, actually: that’s why graphs were invented.)

The first step in the gene-to-sound conversion was to pare down multiple measurements to a few fundamental signals, each of which could be represented by a different note. Together, the notes would form a harmonic chord in normal, healthy states and become increasingly out of tune as key physiological signs go awry, signaling disease.

He found, for example, that “when set to music, colon cancer sounds kind of eerie.” You can listen to some samples online. (Via KurzweilAI.net)

Alterovitz hopes the system could be tuned to identify other diseases, and might have applications outside medicine: it could be used to simplify information for air-traffic controllers or in other situations where large data sets have to be analyzed.

Not only that, a DJ in the Boston area is apparently interested in playing Alterovitz’s “music” in local bars.

Perhaps he could call it “Forever in Blue Genes.”

3 thoughts on “Translating genetic information into music to diagnose disease”