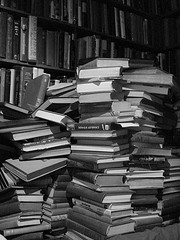 Another six months passes, and yet again it’s time to fire up the already-old (and probably unwinnable) argument over whether or not the all-pervasive power of TEH INTERNETS is eroding morals and family values contributing to the decline and fall of the Holy Roman Empire vaguely connected to the perceived decline in literacy in developed nations. [image by austinevan]

To be fair, this New York Times piece is pretty balanced, and the only sensationalist moments it contains are the wild-eyed proclamations of the old guard:

Some traditionalists warn that digital reading is the intellectual equivalent of empty calories. Often, they argue, writers on the Internet employ a cryptic argot that vexes teachers and parents. Zigzagging through a cornucopia of words, pictures, video and sounds, they say, distracts more than strengthens readers. And many youths spend most of their time on the Internet playing games or sending instant messages, activities that involve minimal reading at best.

Right, of course. And if it hadn’t been for the decadent influence of the gramophone, the Great War would never have happened! Damn kids, get off my lawn! And don’t bring up shifting educational standards again – it’s high time you learned not to talk back to your elders!

Sheesh. I expect it’s a case of “seek and you shall find” with these people, to be honest. After all, people have been lamenting the decline of the younger generation since Plato, and we seem to have made it quite a way since then.

What about you, dear readers? Has following Futurismic turned your grey matter green?