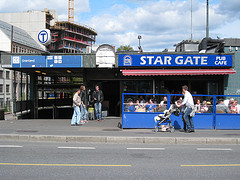 Researchers in Geneva are trying to figure the speed of quantum entanglement, aka “the fact that measuring a property of one particle instantly determines the property of another…” Experiments with photons 18 km apart suggest that entanglement “moves” at least 10,000 times the speed of light. “I think there’s probably much deeper issues,” comments one of their British colleagues. [SciAm]

Meanwhile, to propel your starship by real-life warp drive, two Baylor U. physicists say you can too change the laws of physics. Just bend the space around the ship by recreating conditions that existed when the universe was expanding, and light moved faster than it does today. All we need is 11 dimensions a la string theory, and a mass the size of Jupiter to convert to pure energy. And we thought an invisibility cloak was impressive. [io9; Discovery News; preprint]

Back in this millennium, bulky, expensive, and complicated electronic routers are slowing down the Internet. A possible solution: slow down light itself, through the use of “metamaterials” to do away with all that tedious mucking about during the switching process.

“With these materials, you could imagine something more like a single chip with the metamaterial handling the routing—all the capability of one of these big filtering systems, but the size of your fingernail,” says Dr [Chris] Stevens [of Oxford].