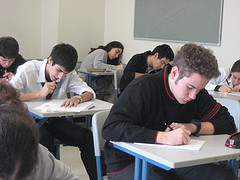 2 thoughts on “Everything Can And Will Be Hacked: digital testing systems”