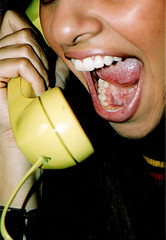 An interesting look at the changes in language over time – and a science-fictional look at what languages of the future might be like in 1000 years time:

… some factors do show long-term directional influences.  An obvious one is ease of use: people won’t bother saying “omnibus” when “bus” will do, or “environment” when their friends are getting away with “emviromment”.

Children forming their initial mental model of how English works don’t want to believe it’s a mess of random idioms; any regularities they notice (like “past tenses end in -ED”) are extended by analogy as far as their peers will let them (“bended”).  All these consistent “trends” in language change make prediction more feasible, or at any rate, less obviously hopeless.

A slightly different comment on language-change is provided by Erin McKean in the Boston Globe, pointing out that there is nothing wrong with changing the English language if you can get your point across clearly (I tend to be pedantic about word-use – a tendency I’m trying to remove):

Part of the joy and pleasure of English is its boundless creativity: I can describe a new machine as bicyclish, I can say that I’m vitamining myself to stave off a cold, I can complain that someone is the smilingest person I’ve ever seen, and I can decide, out of the blue, that fetch is now the word I want to use to mean “cool.” By the same token, readers and listeners can decide to adopt or ignore any of these uses or forms.

2 thoughts on “Future talk: how will we speak in the future?”