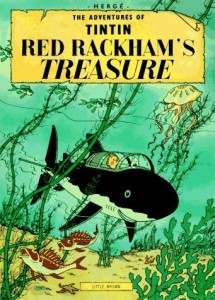 Fans of Hergé‘s superlative graphic novels  The Adventures of Tintin will appreciate this creation of a dolphin speedboat that bears a strong resemblance to Professor Calculus‘ shark (rather than dolphin) submersible in Red Rackham’s Treasure, from Ananova News:

The two-man £30,000 craft has been designed to mimic the shape of a dolphin and self-rights whenever it splashes down.

The mini-submarine has a top speed of 45mph over the surface of the water and half that when it dives under.

The 15ft fibre-glass machine can stay under for long periods as it has a snorkel that supplies air to its 1,500cc, 215hp marine engine.

[story via Slashdot][cover from Wikipedia]