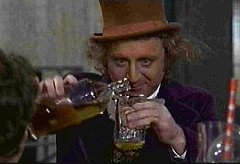 Um. I can’t really add much to the title, churnalism be damned, this is good stuff:

Comedy Central announced Monday that the host of The Colbert Report will have his DNA digitized and sent to the International Space Station (ISS). According to the Associated Press, Stephen Colbert’s gene package will be carried there by famed video game designer Richard Garriott, who will travel to the station in October.

All in all, a great day for humanity. Also I wonder what a gene package looks like?