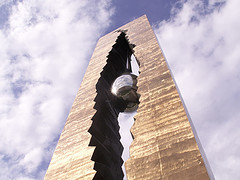 Based upon conversations with the WTC survivors, researchers from the Universities of Greenwich, Ulster and Liverpool concluded that more than half of them delayed evacuating because they wanted to gather information about what was happening; those intent on getting more info about the attacks before exiting took between 1.5 and 2.6 times longer to begin evacuating than others; and congestion in stairways was the main cause of delay in getting out, even though the towers were less than one-third occupied that day.

Also: Al-Qaeda HQ has harsh words for AQ in Iraq:

And some angry leftist observes:

Aside from everything else, 9/11 was the day our mainstream news people promised they’d stop focusing on the trivial.