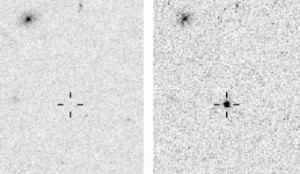 Hubble-using astro-boffins have seen something they don’t recognise in the boundless worlds of space:

The object also appeared out of nowhere. It just wasn’t there before. In fact, they don’t even know where it is exactly located because it didn’t behave like anything they know. Apparently, it can’t be closer than 130 light-years but it can be as far as 11 billion light-years away. It’s not in any known galaxy either. And they have ruled out a supernova too. It’s something that they have never encountered before. In other words: they don’t have a single clue about where or what the heck this thing is.

That’s a pretty big margin of error! Also check out the paper itself (via Sky and Telescope).

I was surprised to discover, whilst reading Bill Bryson‘s brilliant A Short History of Nearly Everything how difficult it is to ascertain astronomical distances precisely, and how much brain work and observation goes into it.

Anyway I’d love to find out what this is (an OCP perhaps?). Such excitement!

[from Gizmodo][image is credited to Kayle Barbary and others]

One thought on “That’s no moon…”