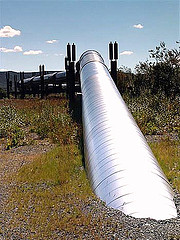 I’m going to shamelessly crib from io9 and link to the Cleantech Group’s write-up of a talk by an environmental futurist named Peter Schwartz, because he has a pretty provocative point to make. In a nutshell – Peak Oil is a lie, and it’s a lie that could make things worse rather than better.

Peak oil is wrong. We really don’t know how much oil there is in most of the oil reservoirs of the world. Oil reservoirs are complex geological structures, and most of the data is in private hands, or in state governments, and they are not particularly forthcoming about how much is there.

However, he’s far from denying that climate change is a problem:

We are not going to run out of oil before the issue of climate change drives change. It’ll be costly oil. But it’ll be climate change catastrophes [such as sudden, unexpected displacement of large numbers of people, and massive property damage], and more expensive oil, not the fact that we’re running out of oil, that will drive change…

Of course, Schwartz is just one man, and an awful lot of people seem to be pretty convinced that Peak Oil is real, so I can’t argue that either way because I don’t have the knowledge or evidence to do so. But it’s interesting (and refreshing) to hear someone deny Peak Oil without denying climate change at the same time. [image by Steve Deger]