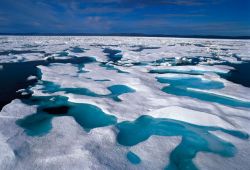 Hoooooo-boy. Just in case global financial disasters and geopolitical instabilities haven’t given you enough things to worry about, here’s a another: remember when scientists suggested that melting ice-caps at the poles of the planet could end up releasing massive reservoirs of sub-oceanic methane into the atmosphere, amplifying the greenhouse effect and accelerating climate change to an even greater degree?

Turns out that we’re finding more evidence for that theory than anyone really wants to find. Anyone wanna buy us out of this little problem? [via WorldChanging; image from linked Independent article]

2 thoughts on “Climate change steps on the gas”