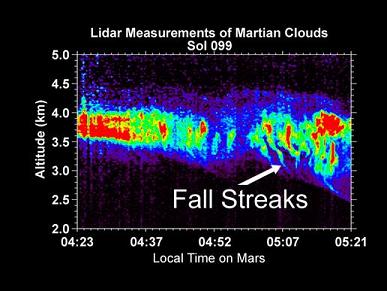 The Phoenix lander aimed a laser at the clouds and found ice crystals about two miles above the surface. Mission scientists hope to see snow actually fall to the ground.  NASA says the snow is water-based. Mars is too warm to support frozen carbon dioxide. “Scientists are able to determine that the snow is water-based and not carbon-dioxide snow, since temperatures on Mars are currently too warm to support the latter,” NASA adds.–Setting-the-record-straight-Tom

There’s also geological evidence of past liquid water on the planet.

Peter Smith, the lead scientist for the mission from the University of Arizona, said the team is going to try something new in the last weeks of Phoenix’s life.

The lander carried a microphone, which was designed to listen to the roar of the descent engines as the craft settled onto the Martian surface. The microphone was not used then. Now, Smith said, the scientific team intends to turn on the microphone “and listen to Mars for the first time.”

3 thoughts on “Snow over Mars”