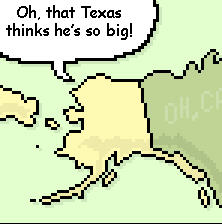 Look, her accent doesn’t bother me.  (It’s the last thing about her that bothers me.) My family includes Minnesotans, so I kind of like her accent. But I’m not the only person who’s been wondering where it comes from. Slate.com called upon a regional-speech specialist, an Alaskan-native scholar, and Frances McDormand’s dialect coach to venture some guesses. Sounds like Minnesota after all:

[Some] have wondered whether her accent hails from Idaho, where her parents are from. But dialect features tend to come from one’s peers, not one’s parents, and Palin spent her childhood in Alaska’s Mat-Su Valley, which is where she got her distinctive manner of speaking. The next town over from Wasilla, Palmer, has a large settlement of Minnesotans—who were moved there by a government relief program in the 1930s—and features of the Minnesotan dialect are thus prominent in the Mat-Su Valley area. Hence the Fargo-like elements in Palin’s speech, in particular the sound of her “O” vowel. (Despite its name, Fargo took place mostly in Brainerd, Minn.) However, even in the area, many people speak a more general Alaskan English, the sort one would find in nearby Anchorage. Palin’s frequent dropping of the final G in -ing words and her pronunciation of terrorist with two syllables instead of three are characteristic of general Alaskan English (and Western English) rather than the specific Mat-Su Valley speech.

As with Donald Rumsfeld, some of Palin’s statements can be rendered as poetry.