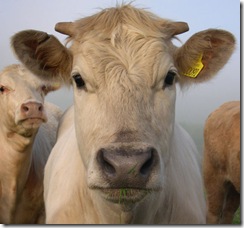 OK, this isn’t actually new technology–it’s been around for years, just not in this part of the world –but it’s the first I’ve heard of it, and it struck me as an interesting example of how advanced technology seeps into everything while you’re not looking. (Via CBC News.)

Each cow in the herd wears a chip that communicates with a central computer.

The system begins with a cow, feeling the urge to be milked or fed, moving through a series of gates to a stall where the animal knows it will be tended to. The computer system knows if Bessie is due for a milking or ready for more feed based on the history it has stored for each animal.

Sensors pick up the cow’s chip to provide location information, allowing the computer to open the appropriate gates to guide the animal along to either a feeding station or the milking system.

Inside the milking stall, a robot arm takes over. It uses laser beams to check udders and direct a fine spray to wash and disinfect teats. Then it attaches hoses and starts milking…

Next thing you know the cows will be blogging. (By the way, CBC’s headline is pretty funny: “The farmer in the DELL® uses a computer to milk the herd.”)

One thought on “"I, for one, welcome our new robot milkmaids…"”