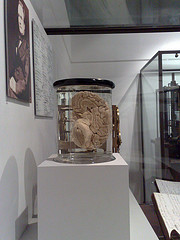 It might seem like a strange thing to say, coming from a person who’s drinking coffee, answering office email, listening to Juliana Hatfield’s great new album How to Walk Away which I really recommend, and blogging, but multitasking is just about impossible, according to MRI experiments.

…[A] man lying inside the scanner would be performing different tasks, depending on the color of two numbers he sees on a screen. … [W[hen the man in the scanner sees green, his brain has to pause before responding — to round up all the information it has about the green task. When the man sees red, his brain pauses again — to push aside information about the green task and replace it with information about the red task. If the tasks were simpler, they might not require this sort of full-throttle switching. But, [U. Michigan neuroscientist Daniel] Weissman said, even simple tasks can overwhelm the brain when we try to do several at once.

Modern life expects us to do more and more things more quickly, if not simultaneously. If that’s not even possible, at what point do we reorder our tasks and expectations? How will your Bartleby-like character cope?

2 thoughts on “Multitasking: You can’t do it, my friends”