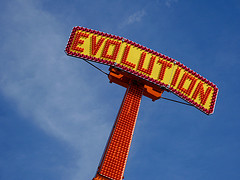 Have the comforts and supports of modern life ended the process of natural selection in humans? Steve Jones, genetics supremo at University College London believes so:

Before modernity, life was so tough that most children died before they reached adolescence. It was a race for survival and only the strongest made it, making out a case for natural selection. This means babies with genetic mutations that made them more resilient had better chances of survival as well as passing on their genes to their offspring.

Jones’ argument is that in a modern world of central heating and plenty of food, the same mutation is far less likely to give a child any advantage. A baby born today can expect to live a long and healthy life, which in turn works against the evolutionary tool of natural selection.

George Dvorsky opines that the theory that human beings have “stopped evolving” is incorrect because it discounts things like genetic drift, sexual selection, and of course, the self-guided evolution of transhumanists.

7 thoughts on “Has evolution halted? Only TIME will tell”