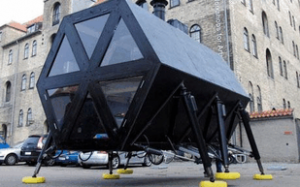 More fantastic innovation from those amazing Danes – this time Danish art collective N55 have, with the help of MIT, created a walking house, from The Telegraph:

The prototype cost £30,000 to build, including materials and time, but the designers believe it could be constructed for a lot less.

The artists in the N55 collective are Ion Sørvin, and Øivind Slaatto. Sam Kronick, from MIT designed the legs.

Mr Slaatto plans to live in the house when it returns to Copenhagen. He has been working on his pet project for two years and was inspired by his meetings with Romani travellers in Cambridgeshire.

He said: “This house is not just for travellers but also for anyone interested in a more general way of nomadic living.

Each leg is powered and works independently and is designed to always have three on the ground at any one time to ensure stability.

For an historical perspective: this project has strong overtones of the SFnal Archigram design movement of the 1960s.

[image and news from Slashdot]